A downloadable game for Windows

Just a small RPG I made for the Indie Game Maker Contest 2017.  It mostly uses default resources since I found out about the contest pretty late, but I did manage to add in some of my own artwork.  ;)  (This game will probably end up being a sort of prototype for a larger, more complicated game down the line so feedback with that in mind is welcomed.  Or just any feedback at all.  That works too.)

After slaying a demon harassing his hometown, a mercenary named Vice teams up with a priest named Alain to find the person who summoned it.  Can they catch the culprit who unleashed this horror or will they perish in the attempt?

The game does have some mild cursing in it.  If I was going to give it a traditional game rating, I think T for Teen would cover it safely.

2.) Extract its contents and click on the application in the newly opened folder to start the game.

What was this made in?

Thought this was made in VX Ace.

I’ve just finished playing this game and I’ve really enjoyed it. Thanks for it!

I really like the characters. They’re not afraid to be vulnerable. Vice feels pain when he’s hurt, his house is a mess, he worries about his battle-torn clothes. He doesn’t spend 24/7 feigning strength or pretending have no problems. I really wish we had more depictions of this kind of masculinity. I’ve been playing a lot of RPG Maker games (I’m fairly active in the Russian RM community), and I wish I saw such characters more often.

The plot is really interesting. The culprit wasn’t hard to guess, but this is not a detective game so that’s OK. However, the plot feels somewhat unfinished: Alain came up only with a temporary solution. If there’s a chance it could get a continuation, it could be great. (But it’s great even if it doesn’t!)

The graphics are very nice. The busts are great, the custom graphics allow to show different emotions and blend in with the standard RM graphics very well.

Thank you so much for taking the time to write such a kind comment!  It definitely renewed my interest in the project.  The current version was made for a game jam which is why it's so short.  I do plan to eventually turn it into a longer game.  I just have a few other projects that I need to wrap up before I can get back to it.  (I did want to make my own sprites at one point so that all the graphics were custom, but I may skip that so it doesn't take forever)

Anyway, thanks again!  (And thanks for taking the time to investigate!  I imagine a lot of people missed that particular interaction. ;D)

I just finished it a couple of minutes ago and I really hope it broadens into an even bigger project! Sorry if there are some spelling errors or whatever, I´m not a native speaker.

The games design looks really pretty and more, idk crisp? than most rpgmaker-games    I´ve seen and I think the cgs and avatars look really pretty too! I think the only complaint I could possibly have is that Vice doesn´t have his scar in some of the cgs, but that´s just me nitpicking. The music fits well with the general atmosphere and I have no complaints.

The villians were really easy to pinpoint but I don´t really find that to be an issue? I mean, Vice himself kinda mentions how one of them seems untrustworthy. The characters were all enjoyable even though the game is pretty short, and the only thing I think could have been expanded upon is a bit more backstory for the main 3. Like, how did Alain and Vice become friends? And what´s the relationship between Jess and Vice? I kinda thought they were dating for a while, with the whole nickname-thing, but now in hindsight it seems more like they are just friends with some unresolved tension. Will there be any romance whatsoever? I dont know! I like these guys either way!

Anyway! The art and the game itself is really pretty and fun, and I like that I could win the final fight regardless if I invested in armour or weapons or whatever. I don´t really enjoy having to grind for a boss fight all the time, so it was a nice surprise! I really hope you´ll continue with this in some way, because it´s such a genuinely charming game.

Gaaaaaah!  I really did forget to add his scar!  After I repeatedly told myself not to forget the scar too!  And then I put that CG in the screenshots!  Haha.   Oh dear.  I'll have to be more vigilant about that in the future.  (I'll probably fix it eventually, but for now I don't want to mess with the game  until the contest is over. )

Anyway, thanks for giving my little game a try.  I'm glad that you enjoyed it and would be interested in a bigger project.  That's definitely encouraging.  If I do make a bigger game (which I'm still thinking I eventually will), it will definitely include a relationship/romance mechanic.  I'm a sucker for them myself so of course I'd have to include one.  ;D

I personally hate grinding  so it was kind of important to me to design the boss battles so that you didn't have to.  My ultimate hope is that they were somewhat challenging if you didn't train, but easy if you took the time to level up and buy items.  (I also figured the poor judges might have had enough of grinding by the time they got to my game. :P)  I probably should have made the villains a little harder to pinpoint because I do agree that it's kind of obvious.  I did kind of want to avoid the whole it was that nice person you grew to love thing that I always see in media though.  I mean, I guess it makes it more surprising, but since it happens so often it's kind of predictable in its own way.  Basically, I was hoping that player's would realize so and so's behavior was problematic and that it probably should have been addressed earlier to avoid this whole incident.

So yeah, thank you for your comment!  You gave me some great feedback that I'll be sure to put to good use!

(On a side note, your comment was very easy to read.  I wouldn't have known you weren't a native english speaker.) 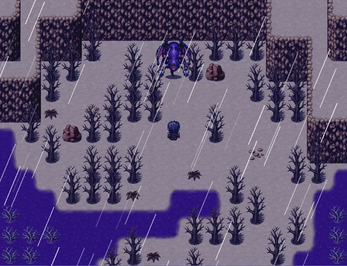 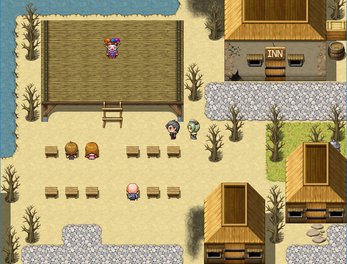 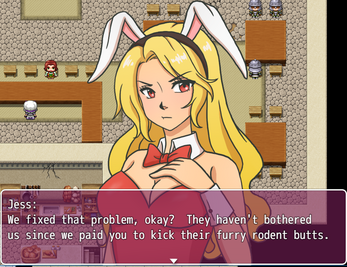 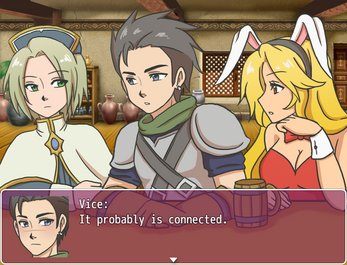